“World War I is over and Tom Sherbourne returns to Australia as a lighthouse keeper on remote Janus Rock. His young bride, Isabel, joins him, and they love their isolated life on Janus. Sadness descends however, as they try unsuccessfully to start a family. A small boat washes ashore carrying a dead man and a beautiful, healthy baby girl whom they make their own, living happily until they go back to the mainland and begin to realize the consequences of their actions. With incredibly visual prose evocative of the time and place, compelling characters, themes of forgiveness and redemption, and a riveting plot that won't let you put the book down, this is a great debut novel.”
— Judy Crosby, Island Books, Middletown, RI

The years-long New York Times bestseller and major motion picture from Spielberg’s Dreamworks is “irresistible…seductive…with a high concept plot that keeps you riveted from the first page” (O, The Oprah Magazine).

After four harrowing years on the Western Front, Tom Sherbourne returns to Australia and takes a job as the lighthouse keeper on Janus Rock, nearly half a day’s journey from the coast. To this isolated island, where the supply boat comes once a season, Tom brings a young, bold, and loving wife, Isabel. Years later, after two miscarriages and one stillbirth, the grieving Isabel hears a baby’s cries on the wind. A boat has washed up onshore carrying a dead man and a living baby.

Tom, who keeps meticulous records and whose moral principles have withstood a horrific war, wants to report the man and infant immediately. But Isabel insists the baby is a “gift from God,” and against Tom’s judgment, they claim her as their own and name her Lucy. When she is two, Tom and Isabel return to the mainland and are reminded that there are other people in the world. Their choice has devastated one of them.

M.L. Stedman was born and raised in Western Australia and now lives in London. The Light Between Oceans is her first novel.

“An extraordinary and heart-rending book about good people, tragic decisions and the beauty found in each of them.”—Markus Zusak, author of The Book Thief

“M.L. Stedman’s The Light Between Oceans is a beautiful novel about isolation and courage in the face of enormous loss. It gets into your heart stealthily, until you stop hoping the characters will make different choices and find you can only watch, transfixed, as every conceivable choice becomes an impossible one. I couldn’t look away from the page and then I couldn’t see it, through tears. It’s a stunning debut.”—Maile Meloy, author of Both Ways Is the Only Way I Want It

“M.L. Stedman, a spectacularly sure storyteller, swept me to a remote island nearly a century ago, where a lighthouse keeper and his wife make a choice that shatters many lives, including their own. This is a novel in which justice for one character means another’s tragic loss, and we care desperately for both. Reading The Light Between Oceans is a total-immersion experience, extraordinarily moving.”—Monica Ali, author of Brick Lane and Untold Story

“Haunting...Stedman draws the reader into her emotionally complex story right from the beginning, with lush descriptions of this savage and beautiful landscape, and vivid characters with whom we can readily empathize. Hers is a stunning and memorable debut.”—Booklist, starred review

“[Stedman sets] the stage beautifully to allow for a heart-wrenching moral dilemma to play out... Most impressive is the subtle yet profound maturation of Isabel and Tom as characters.”—Publishers Weekly, starred review

“The miraculous arrival of a child in the life of a barren couple delivers profound love but also the seeds of destruction. Moral dilemmas don’t come more exquisite than the one around which Australian novelist Stedman constructs her debut.”—Kirkus Reviews, starred review

“This fine, suspenseful debut explores desperation, morality, and loss, and considers the damaging ways in which we store our private sorrows, and the consequences of such terrible secrets.”—Martha Stewart Whole Living

“As time passes the harder the decision becomes to undo and the more towering is its impact. This is the story of its terrible consequences. But it is also a description of the extraordinary, sustaining power of a marriage to bind two people together in love, through the most emotionally harrowing circumstances.”—Victoria Moore, The Daily Mail

“A love story that is both persuasive and tender…”—Elizabeth Buchan, The Sunday Times (UK)

“What an extraordinary book this is. Tom, traumatised on the western front, takes a job as lighthouse keeper on Janus Rock, 100 miles off the Australian coast between the Indian and Southern oceans, where he hopes that the vast surrounding emptiness will bring him peace. When after three years and as many miscarriages his wife hears a baby's cry and discovers a dead man and a baby in a washed up dinghy, she feels her prayers have been answered. The ensuing tragedy is as inevitable as Hardy at his most doom-laden. And as unforgettable.”—Sue Arnold, Guardian

“A beautifully delineated tale of love and loss, right and wrong, and what we will do for the happiness of those most dear.”
— Tova Beiser

Told with the authoritative simplicity of a fable…Stedman’s intricate descriptions of the craggy Australian coastline and her easy mastery of an old-time provincial vernacular are engrossing. As the couple at the lighthouse are drawn into and increasingly tragic set of consequences, these remote, strange lives are rendered immediate and familiar.”
— The New Yorker

“Sublimely written, poetic in its intensity and frailty…This is a simply beautiful story that deserves the praise and wide audience it’s receiving. A stunning debut from a new voice that I can’t wait to hear again.”
— Karen Brooks, author of Illumination 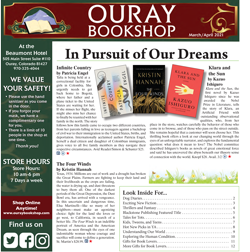